At the beginning of the nineteenth century, there was great poverty throughout Western Europe. In the Netherlands, too, there was insufficient employment for the growing population. Especially in the big cities, there were more and more beggars, abandoned children and orphans. Poor people who were unable to take care of themselves were often called 'paupers'.

Officer Johannes van den Bosch came up with a plan for a structural solution for pauperization. In 1818 he received permission from the State to establish the Society of Benevolence. The Society was a private institution financed by contributions from members from all over the country. The aim was to establish agricultural colonies in which paupers were housed. These paupers were able to build up a livelihood for themselves by cultivating land and thus help themselves out of poverty. Their children had to be educated so that they, too, would become successful in society. Although the aim was to put the families selected for the colonies to work, the subcommittees in the big cities also sent many people who were unable to work. This caused the Society major problems.

THE FREE COLONIES - FREDERIKSOORD, WILLEMSOORD AND WILHELMINAOORD
On August 25, 1818, Van den Bosch laid the foundation stone of the first settler's house in the new colony of Frederiksoord. Willemsoord and Wilhelminaoord followed in 1820. The colonies were divided into districts of 20 to 30 so-called households, to which district masters were appointed. A settler who arrived in the free colonies with his family was given a home with a piece of land, household goods and tools. The families were often supplemented with orphans or elderly people.

Free settlers could work the land of their farm all their lives against payment of one-third of their harvest to the Society. Clothing and household goods had to be paid off gradually. Each settler had his own account and a booklet in which his debt to the Society was recorded.

THE UNFREE COLONIES - OMMERSCHANS AND VEENHUIZEN
Soon after the establishment of the free colonies, the Society found it necessary to establish new colonies. These were intended to accommodate persons of 'less moral and good conduct': free settlers condemned by the Disciplinary Council and beggars from outside the colony. To establish a penal colony, Van den Bosch had an abandoned fort near Ommen, the Ommerschans, in mind. In 1819, the Ommerschans was given on loan by King Willem I. In this penal colony settlers from the free colonies were placed who had been sentenced by the Disciplinary Council. In 1822, an asylum was also built for beggars. From that moment on, beggars were also placed in the colony of Ommerschans.

In 1822 and 1823 the Society bought the hamlet Veenhuizen for the care of orphans and foundlings.
A contract was signed with the government for the placement of 4,000 orphans and foundlings, 500 families and 1,500 beggars. Three large asylums were built in Veenhuizen. There was a lot of resistance throughout the country against sending children to the colonies and therefore it didn't manage to get 4,000 orphans to Veenhuizen. After being completed one of the institutions in Veenhuizen therefore was put into use as a beggar's asylum. The colony of Veenhuizen also included the Agricultural Institute in Wateren, a kind of experimental farm and agricultural school. Only the best pupils were admitted.

In 1826, 178 army veterans came to live with their families on the outskirts of the institutions, both in Veenhuizen and the Ommerschans. They worked as farmers or as guardians of the beggars. Working-class families in Veenhuizen, like the free settlers, were completely free to ask for dismissal if they wished so. However, these working-class families were not trained to manage a farm independently and, like the veterans, lived on the outskirts of the institutions.

STAFF AND SUPERVISION
The colonies were governed by three committees: the Committee of Charity, the Committee of Supervision and the Permanent Committee, of which Johannes van den Bosch was chairman. Also, various subcommittees were established in major cities. The staff, called officials, often consisted of army officers. The settlers themselves often governed the districts and also worked as cooks and nurses. The institutions had an internal jurisdiction exercised by Disciplinary Councils, of which each institution had one.

AFTER 1859
In 1859 the Society threatened to go bankrupt and therefore the Ommerschans and Veenhuizen were taken over by the state. From that moment on, the colonies became 'Rijkswerkinstellingen' (National Employment Agencies). The residents consisted of convicts: beggars and vagrants who had not been convicted of any crime; and prisoners. There were also children of convicts and orphans until 1863. In 1889 the Ommerschans was closed. The convicts were transferred to Veenhuizen.

In 1923 the Society of Benevolence started selling the farms of the free colonies. These were often first rented out to sons of farmers or people from outside the colony. Some of these tenants bought their farms from the Society so that they became independent. After this, part of the farmsteads in Wilhelminaoord were sold. In 1959 the Society was converted from an association into a foundation. This foundation still exists and is located in Frederiksoord. 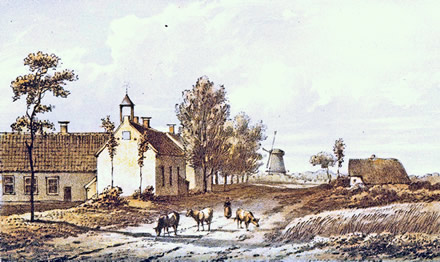 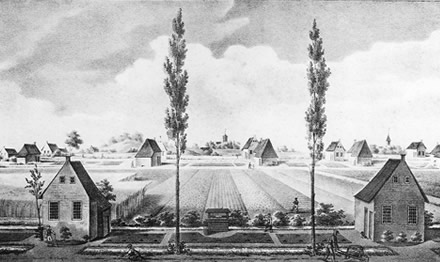